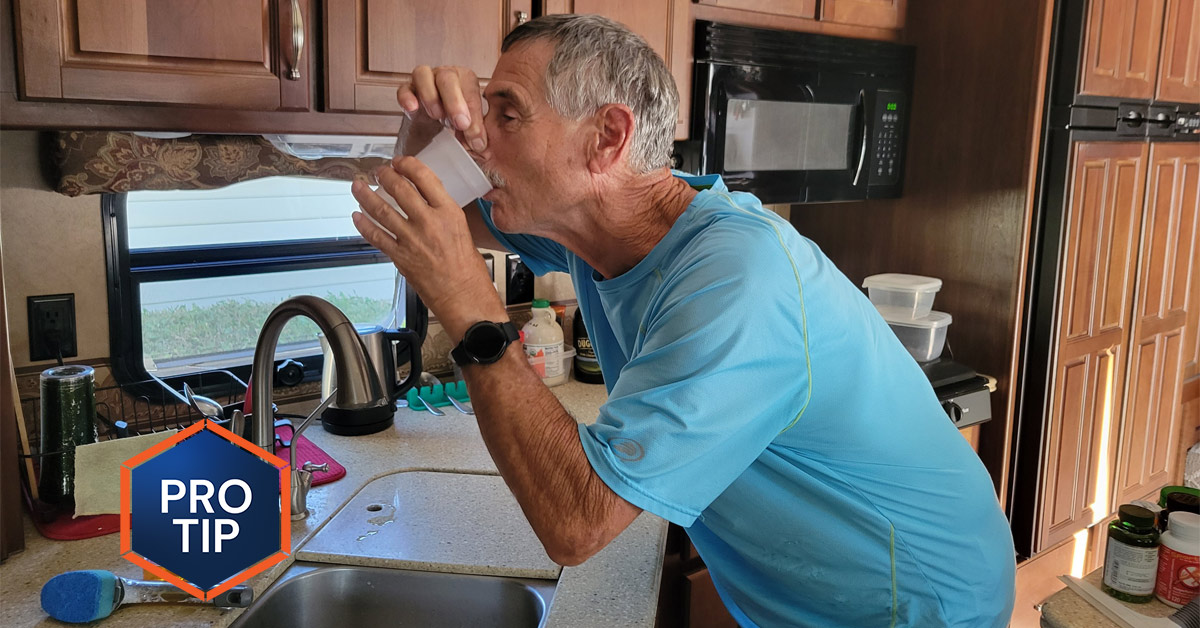 Rather than subscribing to the old method of using a mixture of bleach and water to neutralize bacteria and slime that contaminate the RV freshwater system, treating with Purogene, a solution that’s been around for more than 50 years and EPA-approved, is easier to use — and it’s even safe to drink.

Water system maintenance is one of those obscure tasks that either RVers don’t know about or promise themselves to get done before the next outing — but by then it’s usually too late and all kinds of bacteria or other contaminants begin growing inside the tank, leading to smelly water and health hazards. Unless you’re a full-time RVer, the potable water and the integrated system of pipes and water heater in your RV could end up sitting full (or partially full) for months if the system isn’t drained beforehand — which will undoubtedly lead to contamination. And even if you take care of the water system, there’s still the risk of contamination from RV park water or other sources while on the road.

Fortunately, sanitizing your water system is not that difficult, requiring maybe an hour of your time. Classic procedures suggest the use of bleach and water to sanitize the tank and lines, but bleach is a poison and misuse can lead to even worse problems, including burning of your skin, damaging clothing and that awful lingering taste — even after thorough rinsing, which is mandatory. A better solution (pun intended) is to use Purogene, which has been around for more than 50 years and has the EPA’s blessing for use in drinking water. The liquid is 2% chlorine dioxide, which has no free chlorine and can successfully sanitize and deodorize RV water systems without the aforementioned negative issues related to the using bleach.

Purogene will control the buildup of odor and slime-forming bacteria in your freshwater tank— and it can be left in the system, because it’s safe to drink. A bottle of Purogene lasts a long time, requiring only 1 oz. to purify 30 gallons of water; it can be found on Amazon for $49.98 (32-ounce bottle). Purogene water treatment has been around for more than 50 years and has the EPA’s blessing for sanitizing drinking water. It can be used in lieu of bleach and water and is safer to use, posing no health hazard if consumed. The process is simple if your RV is outfitted with a gravity water fill, like the one here. Gravity fills are somewhat of a lost art these days with the use of multiple valving for filling the tank via city water. For such systems you’ll need some type of siphon device, like a garden sprayer attachment for the hose, to mix in the Purogene with the water. Make sure any such device is dedicated only for this purpose.

Start the cleaning process by draining the freshwater tank and all the lines via the low-point and tank drains. Remove the drain plug or the anode rod from the water heater and drain that tank as well. Next, close all the low-point and tank drains and replace the plug or anode rod in the water heater. Depending on the size of the water storage tank, calculate the correct amount of Purogene and pour it into the water tank. Many water tanks do not have a gravity fill for adding water using a hose, relying instead on a valve to direct water from the hookup (or home) spigot into the tank. If this is the case, you will need some type of a siphon device at the end of your hose; clean (never used for anything but this purpose) garden sprayers work well for this purpose.

Make sure you fill the freshwater tank to capacity with the mixture of water and sanitizer. Turn the demand water pump On and open a hot water source (like the galley faucet) until the air bubbles are purged from the lines, filling the water heater. Run the water through all the faucets and showerhead(s) until it runs freely — and keep in mind that larger RVs will require more time for the water and sanitizer mix to reach the faucets and showerhead(s). If you have an outside shower, be sure you run the hot and cold there, as well. Once the tank is filled with water and the appropriate amount of Purogene (1 ounce for every 30 gallons of capacity), turn on the demand water pump to purge the air bubbles from the hot water line (to fill the water heater), open the faucets in the galley and bathroom(s) and the showerhead(s) and allow the water to run until the Purogene and water mix flow freely. Don’t forget to run water through the outside shower or faucet. You do not necessarily need to run water into the toilet, but it does have several feet of piping routed to the main line and could back feed some contaminates later on. Open the low-point drains and run the sanitized water through that as well. After closing the low-point drains, let the water and sanitizer mix sit for a minimum of one hour (preferably two or three), to make sure that the system is fully sanitized.

At this point you could either flush your system with fresh water or leave it as-is — and gain the peace of mind knowing that bacteria and other nasty contaminates will have to find a home elsewhere. Current Issue
July 2022
Want to increase your campsite comfort levels? Our July issue covers fantastic tips on making your RV home sweet home, presents top products for loading-and-unloading and the latest in RV maintenance, plus so much MORE! Don't miss it!
view premium digital publication preview
Already a Subscriber? Click here for Access to the Full Issues.
Share This